My youngest son was baptized after mass on "Sign Up Sunday" for CCD classes at our old church. Our oldest of the five was a first grader and I did not get her signed up. When I arrived at the door of the classroom the next Sunday, I was told there was no room for her in the class. We drove home, I looked in the phone book under Catholic churches and called the first one whose name began with "A". The director and first grade teacher were at my house that afternoon with forms and activities she missed that morning. When I got a call on Monday from the first church to apologize for a misunderstanding, I had already switched our membership.

The next Sunday she and I arrived for mass. Afterwards I was walking her to her classroom when I was stopped and told the church was having a breakfast to celebrate something. I confessed I had not brought any money and was told - there is no charge. Our parish is a little country church that does not have an attached school (anymore, kids my age actually attended the two classroom school back in the 60's before the diocese closed it). I knew we had landed in the right place, where God was more important than money.

Two years later I was the first grade CCD teacher, a position I loved and enjoyed for 20 years. Year 21 I arrived at church on Sign Up Sunday with my crayons and the director, who can talk me into anything, sat in my pew and said she was moving me to the confirmation class. Yikes. I taught the now called PSR confirmation class for 8 years, retiring when my first grandchild moved to Ohio. About 5 years later I succumbed to begging and returned for another 4 years in the confirmation game.

By then things were changing. Our churches became sisters and twins and were matched with different other churches along the way. We were no longer just a little country parish, we were lumped with larger churches who didn't like our ways. Everything became a "charge" or fundraiser.  I began to call our parish the red headed step child (does anyone say that anymore?) I do still sit on a board at a catholic church in town that we were sister/twined with maybe 15-20 years ago. They lost our parish but kept me, lol.

Then came the elections in 2015. All the sudden the little country church became very political. I was uncomfortable with the name calling on Facebook. I was a nicer person then and quietly unfriended former church friends.  I sat by myself in the back of church and resigned from most church activities, including the ladies group where I had served as an officer for over 25 years. I still baked ridiculous amounts of pies for church functions and did grunt work when called by certain people, but I was not an active part of this community.

Covid. As a church, many of the members felt this was a hoax and masks were an infringement of rights. They did begin sharing mass on Facebook so I have attended from my recliner for the past two years. I have been totally absent in activities. I have really struggled with this.

Last week a church friend I respect contacted me. She and I used to do a lot of small breakfasts and dinners and projects behind the scenes. She wanted to revive a former activity we did where we invited our graduating seniors and their families to breakfast on a Sunday in May. Of course I said yes. We are a small parish and our first count was 2 graduates, parents, grandparents, priest and deacon for a total of ten. After they heard it was Mary and Maria (you know, we are catholic), the number grew to over 40. She and I do these things out of the love in our hearts, not for money or donations.  Here is what we came up with. (sorry some is eaten - even with a Jessica helping, we were busy!) 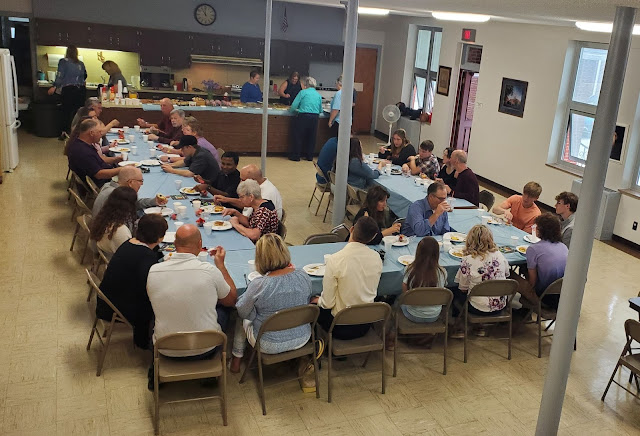 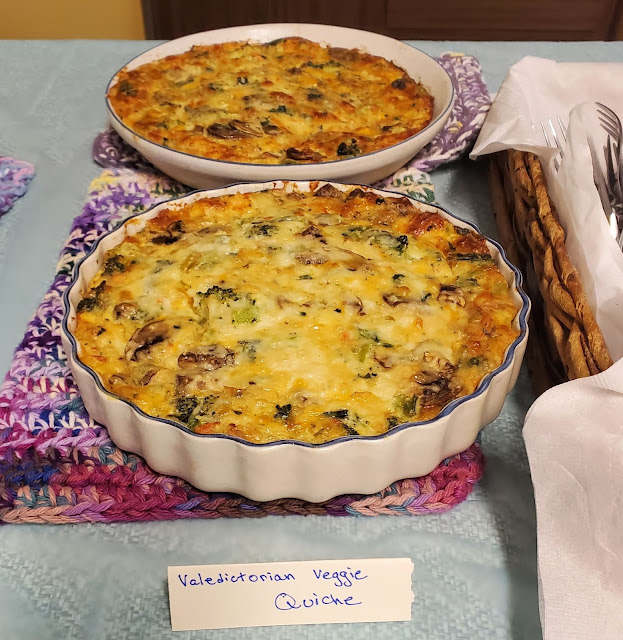 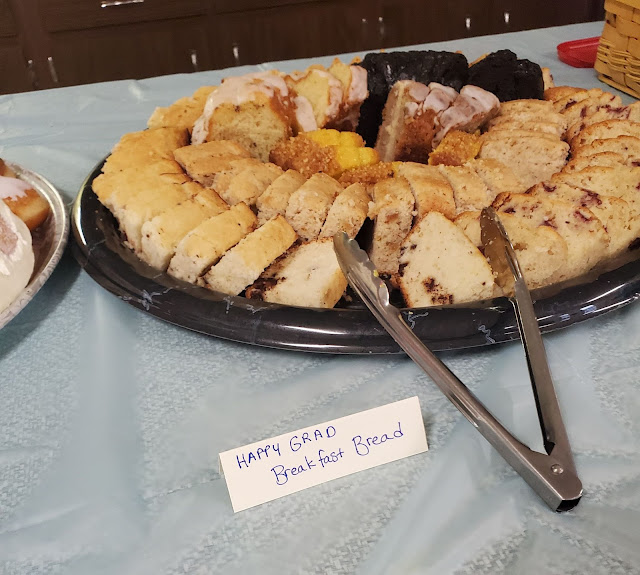 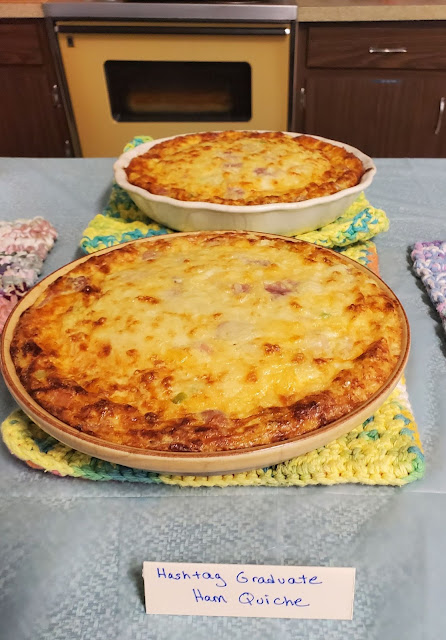 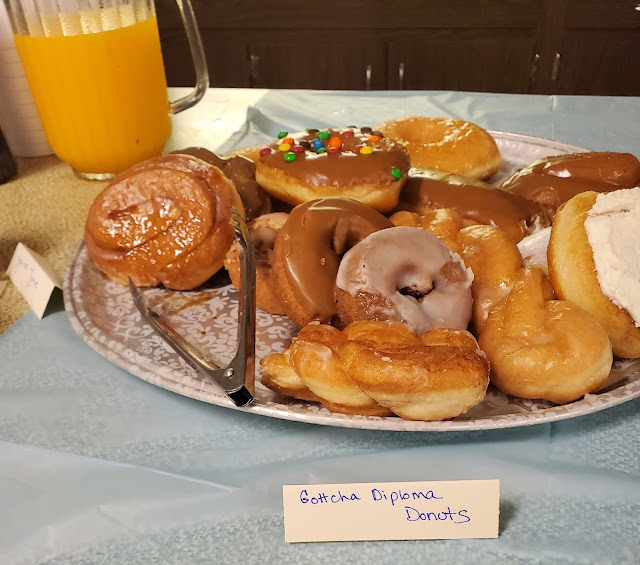 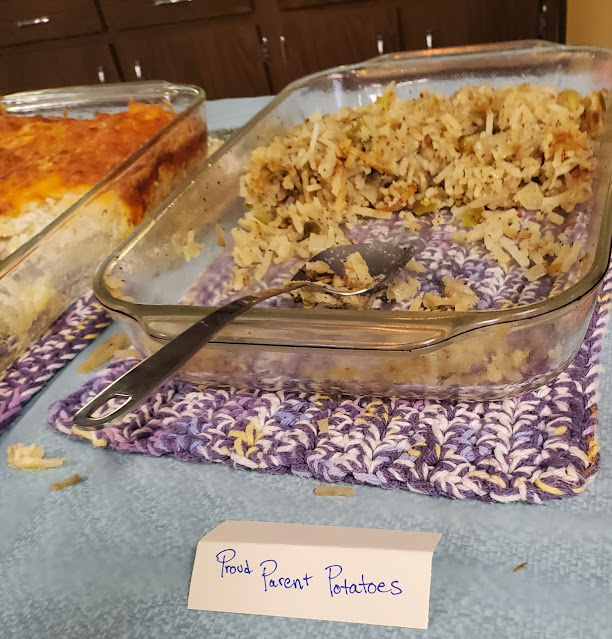 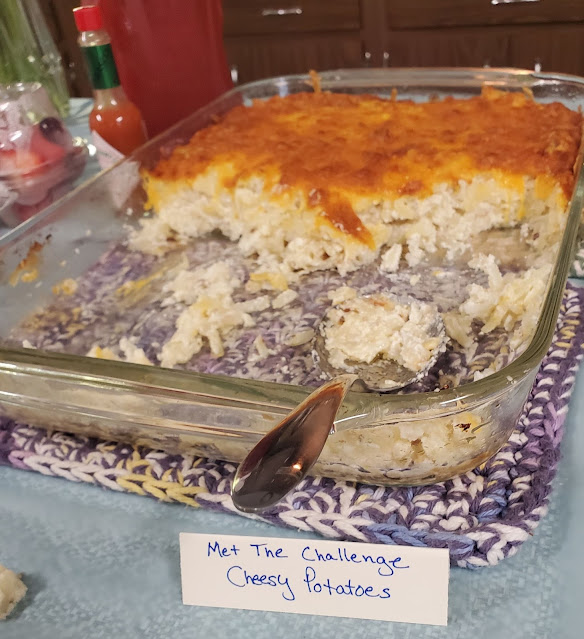 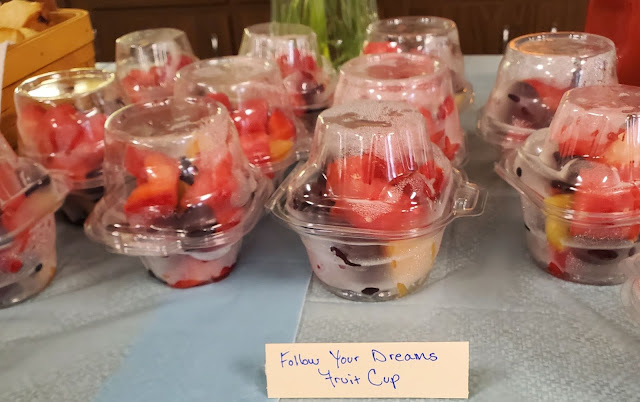 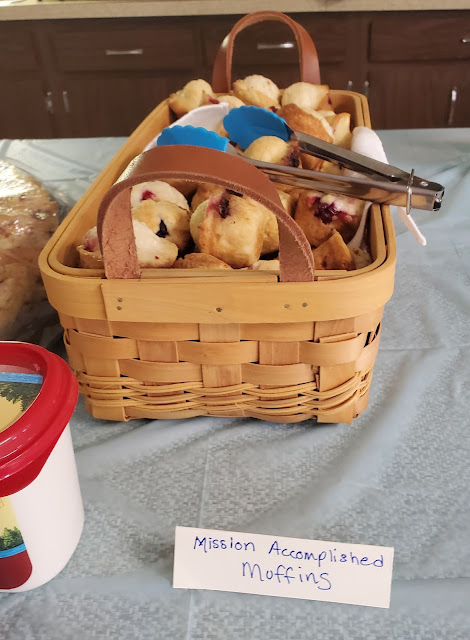 One of the things I have missed most is the fellowship. Well, first the kids, but second the fellowship. We had time before the breakfast for some long talks. Unfortunately I heard lots of hurt and sadness from others, too. I am not sure if there is just a meanness in the clergy or just general tactlessness where people in power don't realize how what they are saying is affecting people. As much as I was hurt by words and actions of other parishioners, the words and actions of church leaders toward others is much worse.  I will be sticking to the Facebook services for now and will be praying for people who are very hurt.
at 11:12 PM